Book Blitz & Giveaway - Murder at the Met by E.W. Cooper 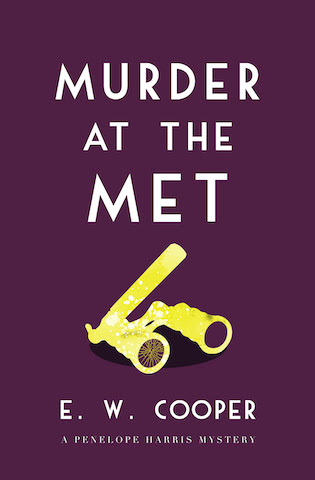 Murder at the Met
(Penelope Harris Mysteries #2)
Author: E.W. Cooper
Publication Date: April 8th, 2021
Genre: Adult Historical Mystery
Book Description:
November 1928, New York City. No one can keep a secret like high society – especially when that secret is murder.
There are two things Penelope Harris would rather do than get involved with another murder—sing opera and flirt with Thom Lund. When two tickets ensure Penelope and Thom get some precious time together at the Metropolitan opera, neither believes another murder will interrupt their romantic evening.
Fate has a different plan. Before the night is over a failed manufacturing tycoon is found dead at the bottom of a staircase, his poisoned and dying daughter nearby. Is it an accident? Suicide? Or murder? When a fellow soprano pleads for help, Penelope just can’t help her inquisitive nature.
As Penelope pulls back the cover on a diabolical crime, Lund rushes to complete the investigation of a suicide on the Gold Coast of Long Island. What they find will uncover the sordid underbelly of high society and put Penelope on the wrong side of her own gun.
Buy Links:
Amazon US ¦ UK

“There are three sisters?” Penelope prompted.

“Clover, Ivy, and Tulip Warwick. Sisters, all of them.” Mary replied, happy to be the source of all the best gossip. “Ivy is the worst kind of child. Ill-behaved. Well, you saw, didn’t you? Her mother knows it too—keeps sending her away to finishing school. She must have just gotten back. Tulip would be the best of the three if she could just buck herself up. At least Ivy got to go away. Tulip had to stay behind and look after her mother. I see her from time-to-time volunteering at the library. She’s nice.”

“Only nice? Not the best recommendation, Mary darling.”

“You’d know how high a recommendation if you met Clover.” Mary lowered her voice. “Clover Warwick positively has the very worst temper I’ve ever seen. Last year she attacked one of her housemaids with a shoe. The poor girl lost an eye to Clover’s dancing shoe. I was certain she was going to be arrested this time—”

“—but she wriggled out of it again. Everyone said her father bought the maid off. Roger Warwick must have done something, because the girl had an uncle in the police. I was so certain she would be charged!”

“Mary, that simply cannot be true! You can’t just assault a maid and get away with it!”

“Connie Whitman volunteers at the hospital and saw the maid after it happened. She said Clover could have killed her. Good lord!” Mary put a hand to her mouth. “I hope she didn’t die. I hadn’t thought of that. I hope the poor girl didn’t succumb. Absolutely horrible. But that’s who Clover is, isn’t it?”

“Are you telling me that Clover Warwick, who everyone knows almost beat her maid to death with a shoe, is singing at a society gala with a premier soprano from the Metropolitan Opera? How is that possible?”

“Violet Warwick has spent thousands on Patsy’s production to get Clover the best solo. Patsy says it’s a drawing, you know—so everyone gets a fair chance. But we all know it’s not. It always comes down to money, one way or another,” Mary nodded sagely. “I do wonder what happened to the maid.” A furrow appeared on her brow. “I see how unfair it all was now. No one would have hired her afterward, you see. It would have upset Clover. No one upsets Clover. She retaliates—I suppose it’s a good thing her father is only in manufacturing. If it had been lumber or coal . . .”

“What on earth do you mean by that?” Penelope’s head was spinning with all the social rules she didn’t know. Running a casino in Shanghai had been easier than learning the hierarchy of New York society. The rules guiding the criminal class had been as straightforward as they come. “Why would it make a difference where he makes his money? Isn’t it all the same money?”

Mary was aghast. “It’s well and good to have money when no one else does, but you can’t swan about without a care in the world when everyone knows you made your packet manufacturing cheap wire hangers. I’ll never use them, and I don’t know anyone who would. Charles says it’s just a piece of wire tied up in a knot. Can you imagine? I tell you this, Penelope: Clover can work as hard as she wants to get an invitation from an Astor, but she never will. High society won’t have anything to do with something as low as a wire hanger—even if it is clever. I bet you Clover would leave town and change her name if she could, just to get away from it.”

About the Author
Author of the Penelope Harris Mysteries, E.W. Cooper was ecstatic to learn her debut in the series, The Jade Tiger, was the 2020 Booklife Prize Finalist in Mystery/Thriller. A lifelong fan of classic mysteries and Grand Opera, Ms. Cooper is hard at work on the second book in the Penelope Harris Mystery series, Murder at the Met (April 2021). She lives quietly with her partner, children, three dogs, and one cat in a very noisy house in South Texas.

To learn more about Penelope Harris Mysteries (and the author) go to www.ewcooper.com and snoop around.