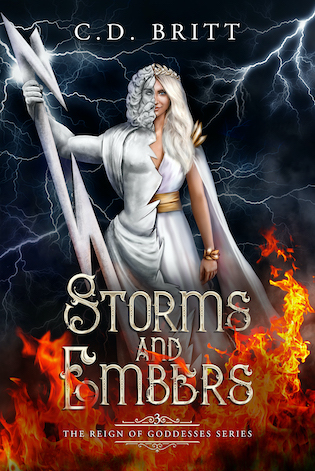 Storms and Embers
(The Reign of Goddesses, #3)
Author: C.D. Britt
Publication Date: November 1st, 2022
Genre: Adult Urban Fantasy
Book Description:
Archon of Zephyr.
Queen of the Goddesses.
A Broken Woman.
Hera has reigned over Olympus and humanity for millennia. Seen as cold, sarcastic, and callous, she uses this to her advantage, keeping everyone, including her sisters, at a distance. It’s a lonely life, but it worked, until the Titans decided that breaking her father out of Tartarus was a good idea. A move that put her and her sisters against the Titans in a battle for their thrones upon Olympus.
Dr. Viktor Alden understands being alone. As a man who has spent his immortal life as a nomad, living with an oath that has kept him from allowing anyone to really know him, he is fascinated by the enigmatic woman who quite literally runs the world. Too bad they have a battle they may not win, or even live through, for him to learn the intricacies that make up the Queen of the Goddesses.
Now, two people who have spent their entire lives distrusting the world must learn to trust each other if they want to survive the upcoming war.
Storms and Embers is the final book in the Reign of Goddesses series.
TW: violence, cursing, adult situations.
Buy Links:
Amazon US | UK

A horrible scream rent the air, stilling Hera in the middle of the dirt pathway. Before she could move forward, another piercing scream followed on the heels of the first. This time, she knew the voice as it begged their father to stop.

Ignoring her instincts to run in the opposite direction, to find her mother, she ran to the great tree that grew next to her home. She clambered up the tree, her skin scraping on the bark as her limbs climbed from memory.

When she reached the branch that overlooked the window near the hearth, she looked into the house, squinting in the dim light of morning. As she leaned forward, she lost her grip on the branch and barely caught herself. Steadying her hold, Hera held her breath and watched for movement.

She could see a hand, blood streaming from it, grapple with the edge of the window. Black hair and a tear-streaked face entered her view as her sister pulled herself up.

Catching a glimpse of her in the tree, Persephone found her gaze and mouthed, “Run.”

Hera’s heart raced. Run? Run where? To whom? How could she run when something was so, so wrong?

Her sister, her serious and beautiful sister, slumped forward, unconscious. The slight movement of her hair against her mouth from her shallow breaths was the only indication that she was still alive at all.

The fear that crowded her mind was intense, and Hera began to tremble, nearly losing her grip again. All she could see was Persephone not moving and covered in blood. Suddenly, a thump and several screams rang in her ears. Screams she knew would haunt all her days. High screams. Young screams. And deep, wordless shouts of a man’s rage.

It was the silence that followed that punched her into action.

Turning, she scrambled down the tree and ran to the wheat fields where she had left her mother chatting. Her feet pounded the earth as she ran the fastest she’d ever moved, tripping over vines in her haste. She ignored the pain of the rocks digging into her flesh, desperate to get to her mother.

Before she could reach Mother at the end of the path, a large figure emerged from the line of trees ahead of her. A chill ran up Hera’s spine, and she dug her heels into the dirt, pivoting to hide behind a fallen log as she watched her father step out into the road. Her thoughts raced— how had he gotten to the road before her?

Father raised his hand, revealing in his grip a knife dripping with blood. She knew at that moment her sisters were dead.

He rotated slowly, his eyes scanning the tree line.

“Hera, Hera, Hera,” he called out in a sing-song voice. “I saw you running, dearest. I know you are here. Come on out and talk to me.”

Her stomach dropped through to the earth below at his bold lie. She knew her father did not want to talk.

Crouching, she quietly moved to the end of the log, keeping herself as covered as possible by the bracken around her, and the road in sight. Father was on one end and her mother, farther down in the opposite direction. Could Mother see him yet? Would she look over and see Father in this mad state?

Hera knew she was taking a risk getting her mother’s attention, but she had to do something before Father found her.

She backed deeper into the woods, careful not to step on fallen leaves and twigs. Father paced the road, knife still in hand. If she could get closer to her mother…

Dread struck her chest as her father whirled toward the sound with stunning speed, and Hera’s heart raced. She’d been able to get closer to her mother by creeping through the undergrowth, but had she gotten close enough?

It would have to do. As her father started in her direction, Hera burst out into the road.

“Mother!” she cried out, straightening and preparing to run to her. Her mother turned abruptly, her smile faltering as she caught sight of the murderous presence behind Hera.

In a split second, her mother disappeared, only to reappear beside her. Stunned, Hera faltered and blinked at the empty space where her mother had been as she pushed Hera behind her. She fell to her hands and knees as her mother widened her stance, standing like a wall between Hera and her father.

Her mind spun. Her mother’s speed. Her father’s rampage. The sight of her sister’s bloody hand and the sound of their screams. Hera was confused by all of it.

“You swore they were human,” he growled.

Human? Of course, they were human. What else could they be? Was there something about her parents that she and her sisters had not known? 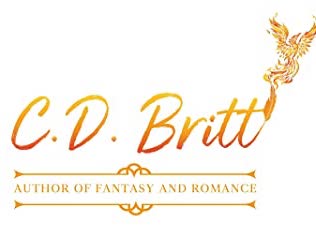 About the Author
C.D. Britt began her writing journey when her husband told her she needed to use her excessive imagination to write stories as opposed to creating a daily narrative for him. Ever since she penned her first words, life has been a lot more peaceful for him.
She currently resides in Texas where she has yet to adapt to the heat. Her husband thrives in it, so unfortunately they will not be relocating to colder climates anytime soon.
Their two young children would honestly complain either way.
When she is not in her writing cave (hiding from the sun), she enjoys ignoring the world as much as her children will allow with a good book, music, and vast amounts of coffee (until it’s time for wine).
C.D. Britt is the author of Shadows and Vines and the upcoming book, Sirens and Leviathans.
Both books are part of the Reign of Goddesses series.
Author Links:
Website | Goodreads | Facebook | Twitter | Instagram | Pinterest | Newsletter
***GIVEAWAY***
a Rafflecopter giveaway