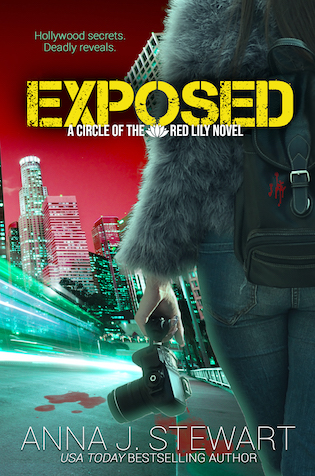 Exposed
(Circle of the Red Lily, #1)
Author: Anna J. Stewart
Publication Date: November 15th, 2022
Genre: Adult Contemporary Romance / Suspense
Book Description:
Hollywood Secrets. Deadly Reveals.
Working as a Hollywood photographer means Riley Temple has seen it all, but that theory is put to the test when she finds herself staring at the chilling image of a dead woman. When her questions about the film’s origin results in violence, she finds herself reluctantly turning to the only person who assures her he can help: Detective Quinn Burton. Her history with the LAPD is complicated, her trust in authority, tenuous. But to find those responsible and to protect those closest to her, she’s willing to do anything. Even trust a cop.
After more than a decade on the job, Quinn knows a dangerous situation when he sees it and Riley Temple is up to her ears in trouble. But not for the reason she thinks. The pictures she’s stumbled on calls into question a notorious murder conviction; a conviction partially secured by Quinn’s own police commissioner father. A conviction powerful people have a vested interest in keeping in place. Quinn prides himself on being loyal but seeing this case through means betraying someone: his job, his family, or the woman he’s falling in love with.
As their investigation begins and old secrets are revealed, Quinn and Riley find themselves targeted by members of a secret society that for decades has maintained influence and violent control over Los Angeles and Hollywood’s powerful elite. A society that, until now, has remained hidden in the shadows.
A society that will stop at nothing to keep their secrets buried.
Buy Links:
Amazon US | UK

“What’s wrong?” She wasn’t entirely sure why her stomach clutched at the sight of Quinn using a magnifying glass on one of the photos, but it could have to do with the somewhat dazed and shocked expression on his face.

But that expression vanished when he lifted his gaze to hers. “Sorry. Just thinking.” He set the glass down. “These pictures are … disturbing. I’m trying to imagine someone playing dead for the camera.”

“You think she’s acting?” Of all the reactions she’d imagined the good detective having, that hadn’t cracked the top one hundred.

“Quinn, that woman isn’t playing at anything. You can see the progression. She’s dying. On film. And here? After she’s been in the water?”

She stepped forward, tapped a finger on the final image. “She’s dead.”

The distance in his voice pushed her deeper into resolve and incredulity. How could he not see what she did? And why did it bother her so much that he didn’t?

“Did Merle tell you where he got the negatives?” She didn’t hear Quinn in his voice now. All she heard was cop. The hair on the back of her neck bristled even as the little voice in her head sang “told you so.”

“Merle didn’t get the negatives, he got the film,” Riley explained carefully. “There’s a difference. I can walk you through the process—”

“Where did he get them?” The urgency in his voice churned up new bubbles of doubt. “Where did the box they were in come from?”

“A customer.” It was all he was going to get out of her as long as he refused to share what he obviously knew. There was no denying that guarded, suspicious glint in his eyes. A glint that removed any lingering doubt the pictures represented far more than just a macabre photo shoot. He did believe they were real—he was just downplaying his reaction. She was trying to decide what would piss her off more: him not believing her, or him pretending he didn’t. The later won out. She bristled.

He set that last picture on top of the others, closed the folder, and picked it up.

“What are you doing?”

“I’m taking these with me.” It wasn’t a question or a request, but a flat out statement.

So he was going back on their deal after all. Disappointment crashed through her. She should have known. “Why?” she challenged. “If you’re saying they’re not what I thought they were—”

“The negatives, Riley.” Every word sounded like an expertly aimed shot from his gun. “Give them to me.”

She crossed her arms over her chest and planted her feet as if standing in front of a linebacker. “No.”

Her fists clenched so hard her nails bit into her palms. It should have come as a relief, the offer to take all of this out of her hands. Heck, wasn’t she just thinking it wasn’t worth the emotional exhaustion to keep dwelling on them? But she didn’t feel any sense of relief by his command. Instead, she felt only a stomach-churning sense of dread and heartbreaking disappointment. She’d probably just broken the world record for almost-hook-up to bust up.

“There’s not really anywhere to go with the word, detective.” The title tasted more than a little bitter on her tongue now. “No, you can’t have the negatives.” 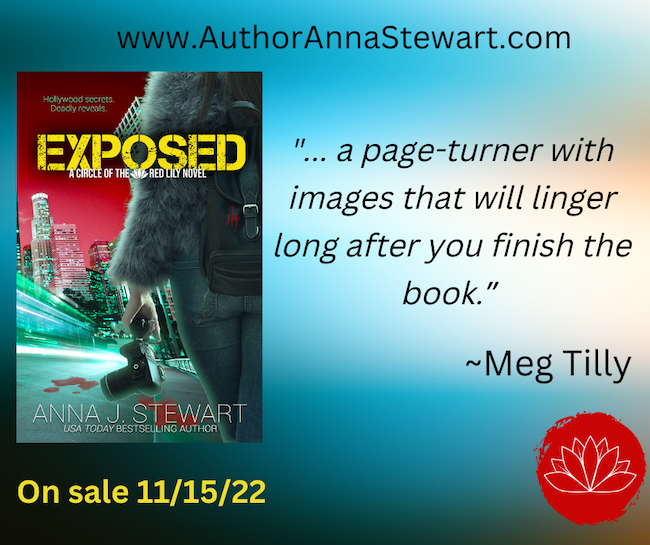 About the Author
Award-winning, USA Today and national bestselling author Anna J Stewart writes sweet to sexy romances for Harlequin and ARC Manor’s CAEZIK (Kay-Zehk) Romance. Her sweet Harlequin Heartwarming books include the Butterfly Harbor series as well as the ongoing Blackwell continuity series. She also writes the Honor Bound series for Harlequin Romantic Suspense and has contributed to the bestselling Coltons. Her Circle of the Red Lily romantic suspense series, published by CAEZIK, will launch with EXPOSED in November of 2022.
A Holt Medallion winner (BRIDE ON THE RUN), as well as a Golden Heart, Daphne DuMaurier, and National Reader’s Choice finalist, Anna loves writing big community stories where family found is always the theme. Since her first published novella with Harlequin in 2014, Anna has released more than fifty novels and novellas and hopes to branch out even more (horror romance, anyone?). Anna lives in Northern California where (at the best times) she loves going to the movies, attending fan conventions, and heading to Disneyland, her favorite place on earth. When she’s not writing, she is usually binge-watching her newest TV addiction, re-watching her all-time favorite show, Supernatural, and wrangling two monstrous cats named Rosie and Sherlock. Visit Anna online at www.AuthorAnnaStewart.com and sign up for her newsletter (giveaways in every issue!).
Author Links:
Website | Goodreads | Facebook | Twitter | Instagram | Bookbub | Pinterest
***GIVEAWAY***
a Rafflecopter giveaway