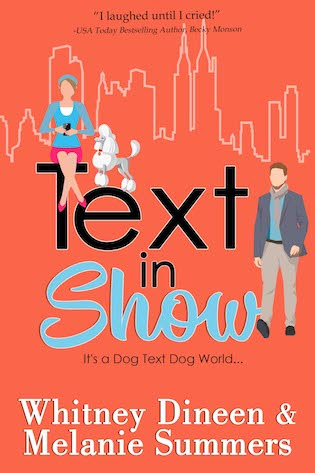 Text in Show
(An Accidentally in Love Story, #4)
Authors: Whitney Dineen & Melanie Summers
Publication Date: June 10th, 2021
Genre: Adult Comedy / Contemporary Romance
Book Description:
It’s a dog text dog world…
Autumn Jones is at a crossroads. With no job offers in sight, she can either return to Koshkonong, Wisconsin to work at her dad’s feed store or she can move to New York and help her older sister Helen coordinate the Manhattan Kennel Club Show. She and Helen may fight like cats and dogs, but Autumn would rather live with a thousand Helens than go home after seven years of college.
Jack Campbell is the veterinarian to Manhattan’s elite. Despite their adoration, he does not love them back. In fact, he’s vowed never to date anyone who walks through the front door of his clinic. He spends his days caring for pampered poodles sporting diamond encrusted collars and placating their high maintenance owners. When he meets Autumn, he assumes she’s going to be another client with more money than brains.
Autumn is thrown into a bizarre world of highly competitive rich women who will do anything to win the coveted title of Best in Show at Manhattan’s most exclusive competition. With her haughty sister breathing down her neck, and a high-strung poodle following her everywhere she goes, she doesn’t have time for love, even if she does find herself face-to-face with America’s hottest vet every day.
Will Autumn run back to Wisconsin with her tail between her legs? Will Jack find out that appearances can be deceiving? Will Helen’s dog Fifi win Best in Show? Find out in the hysterical fourth edition of the Accidentally in Love Series, Text in Show.
Buy Links:
Amazon US ¦ UK

The bell over the door chimes and a young woman walks in with a freshly groomed silver standard poodle, full-on with painted nails and a diamond collar that probably isn’t fake. I look from the dog to her owner, relieved that I don’t know either of them. My gut reaction is to despise her. Anyone who paints their dog’s nails is on my not happening list, even if she is really pretty—which she is. She’s totally got that trophy wife air about her, except there’s no giant rock on her finger, so she must be a wannabe trophy wife. Her dark blonde hair is up in a ponytail. She’s dressed in yoga pants and a fitted long-sleeved T-shirt for that cute girl-next-door look. She probably paid an extra hundred for that tiny hole near the bottom of her shirt, you know, to make it look like she’s not trying.

Aldo points to the door and yells, “NO DOGS!”

The chances that a woman like her will take no for an answer are about as good as me painting my own nails. In other words, it’s not happening.

She gives him a pathetic look, complete with puppy dog eyes. “I’m just here to pick up my order and I’m worried about leaving her outside.”

There it is. She’s clearly not used to hearing no and she’s about to put up a big fuss. I bet she’ll threaten to skewer them on Yelp before she leaves.

“Can you bring me the pizza then? It’s under the name Autumn.”

Autumn. That figures. These Upper East Side women always have chichi froufrou names.

The man in line turns to glare at her. “Would you mind waiting your turn?”

“Sorry, yeah,” she says, looking more flustered than I’m used to seeing in this neighborhood full of privilege.

Also, she just apologized and is now leaving without yelling, threatening, or telling him he just made the biggest mistake of his life. She must be very new at being filthy rich, but she’ll learn.

Autumn turns around to open the door, only to get caught up in the leash. I watch as she loses her balance, then flails her arms which, unfortunately for her, is the universal sign for “let’s wrestle” in the dog world. The poodle leaps up, wags her tail, and bounces as though agreeing to the terms of play. The owner’s weak words of “Celine, no!” mean nothing. In fact, the volume and panicked tone only excite the poodle more. Before I can get up to help her, the woman tips sideways and lands in a huge potted plant with the dog pinning her to the dirt and licking her face. “Celine Dion Josephine Bonaparte, get down girl,” she says, uselessly.

Oh, for … I get up and firmly take Celine Dion Josephine Bonaparte (what kind of name is that?) by the collar, lift her off Autumn, and firmly tell the canine, “Stay.”

Then I pluck the leash out of the woman’s hands and unravel her legs from it. Wow, she smells amazing. Or is that the poodle? Dear God, I hope it’s not the poodle because if so, I’ve got some very expensive years of therapy ahead of me. 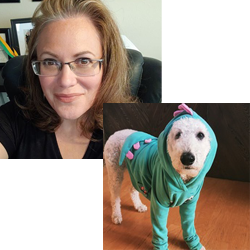 About the Authors
Whitney loves to laugh, play with her kids, bake, and eat french fries -- not always in that order.
Whitney is a multi-award-winning author of romcoms, non-fiction humor, and middle reader fiction. Basically, she writes whatever the voices in her head tell her to.
She lives in the beautiful Pacific Northwest with her husband, Jimmy, where they raise children, chickens, and organic vegetables.
Gold Medal winner at the International Readers' Favorite Awards, 2017.
Silver medal winner at the International Readers' Favorite Awards, 2015, 2016.
Finalist RONE Awards, 2016.
Finalist at the IRFA 2016, 2017.
Finalist at the Book Excellence Awards, 2017
Finalist Top Shelf Indie Book Awards, 2017
Author Links:
Website ¦ Goodreads ¦ Facebook ¦ Twitter ¦ Instagram
Melanie Summers also writes steamy romance as MJ Summers.
Melanie made a name for herself with her debut novel, Break in Two, a contemporary romance that cracked the Top 10 Paid on Amazon in both the UK and Canada, and the top 50 Paid in the USA. Her highly acclaimed Full Hearts Series was picked up by both Piatkus Entice (a division of Hachette UK) and HarperCollins Canada. Her first three books have been translated into Czech and Slovak by EuroMedia. Since 2013, she has written and published three novellas, and eight novels (of which seven have been published). She has sold over a quarter of a million books around the globe.
In her previous life (i.e. before having children), Melanie got her Bachelor of Science from the University of Alberta, then went on to work in the soul-sucking customer service industry for a large cellular network provider that shall remain nameless (unless you write her personally - then she'll dish). On her days off, she took courses and studied to become a Chartered Mediator. That designation landed her a job at the R.C.M.P. as the Alternative Dispute Resolution Coordinator for 'K' Division. Having had enough of mediating arguments between gun-toting police officers, she decided it was much safer to have children so she could continue her study of conflict in a weapon-free environment (and one which doesn't require makeup and/or nylons).
Melanie resides in Edmonton with her husband, three young children, and their adorable but neurotic one-eyed dog. When she's not writing novels, Melanie loves reading (obviously), snuggling up on the couch with her family for movie night (which would not be complete without lots of popcorn and milkshakes), and long walks in the woods near her house. She also spends a lot more time thinking about doing yoga than actually doing yoga, which is why most of her photos are taken 'from above'. She also loves shutting down restaurants with her girlfriends. Well, not literally shutting them down, like calling the health inspector or something--more like just staying until they turn the lights off.
She is represented by Suzanne Brandreth of The Cooke Agency International.
Author Links:
Website ¦ Goodreads ¦ Facebook ¦ Twitter ¦ Instagram
***GIVEAWAY***
a Rafflecopter giveaway
Book Blitz Organised by: