Book Blitz & Giveaway - Give Me More by A.C. Arthur 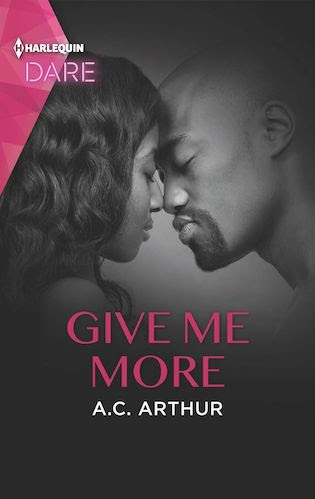 Give Me More: A Sexy Billionaire Romance
(The Fabulous Golds, #4)
Author: A.C. Arthur
Published by: Harlequin Dare
Publication Date: May 1st, 2021
Genre: Adult Contemporary Romance
Book Description:
Fashion exec RJ Gold hasn’t seen Grace Hopkins since she turned down his marriage proposal and walked out of his life. While he’s in Saint Lucia for his sister’s wedding, a run-in with his journalist ex is unexpected…as is the story she’s writing on the decades-long feud between his family’s fashion empire and a rival Manhattan house. Grace’s body is as delicious as RJ remembers…but he remembers too much to trust her again.
Grace knew seeing RJ would be awkward. It’s also intense…and red-hot! But she can’t afford distractions from her big break. This story will launch her journalism career to new heights, a dream she chose over RJ years ago. Still, she would rather work with him than against him… Except working together in paradise makes it impossible to ignore the tropical temptation at play!
As their explosive chemistry and rekindling feelings reach a fever pitch, RJ and Grace must decide—can second chances last, or is their desire on a deadline?
Buy Links:
Amazon US ¦ UK ¦ Barnes & Noble ¦ iBooks ¦ Kobo ¦ Google Play

He tried blinking repeatedly, hoping that when he focused his gaze again, he’d be mistaken, but that hadn’t worked. Now the air froze in his lungs, causing his chest to constrict, and one strangled word tumbled from his lips. “Grace?”

She took a step back, her mouth opening slightly, then closing without a word. That’s how they stood for the next…he didn’t even know how many seconds had passed, and he didn’t dare speak again. As if she’d figured that out, she cleared her throat and finally spoke. “Hello, RJ.”

No, this couldn’t be. Was he sleepwalking? Hadn’t he just thought about his past relationship? Yes, and he’d pushed that memory way back to the place he’d buried it for the last ten years. Only now, it was right here, just a couple feet away from him.

The first and only woman he’d ever loved, the woman he’d wanted to spend the rest of his life with. Dragging a hand down his face, RJ shook his head as if that were going to clear all this away. She was still standing there wearing very short shorts that showed off the rich mocha complexion of her long, gorgeous legs. A white T-shirt fit perfectly against the curve of her breasts and a gold heart pendant dangling from a choker necklace brushed over the hollow of her throat.

“It’s good to see you again,” she said when it seemed she might be the only one capable of speaking at this time.

Memories tangled and fought inside his mind. Grace had been his everything. She was the first and only woman to claim his heart. A heart she’d held so tightly in the palm of her hand that she’d been able to crush it with one, simple word—no. Muted pain rested in the center of his chest.

He hadn’t seen her since that awful night years ago, but now she was here. It was Grace’s voice he heard, her smile he saw as her lips tilted slowly. She eased an arm from behind her back to wave her hand at him as if they were long-lost friends. He didn’t know what to say or do, which was uncharacteristically strange for him. Trying to get his mind right and act like he had some semblance of brain function, he gripped his phone tightly in one hand and nodded.

“What are you doing wandering around out here in the dark?” It wasn’t the most pressing question at the moment, but he was still working up the nerve to ask the other one.

She shrugged, shifting her weight from one foot to the next, and dropped her arms to her side. “Going for a walk, which actually seems like the same thing you were doing.” He should’ve expected the quick and snappy response. It was her signature and matched her ambitious and flirtatious personality perfectly. She loved to talk. Where some women might like cuddling after sex, Grace had been a talker. Those were the nights he’d learned so much about her. Unfortunately, the one time he’d needed her to be chatty, she’d clammed up and walked away from him for what he thought was going to be forever.

He had to ask her. It made the most sense that this next question come, he just didn’t know how he was going to feel about her answer. “It’s been a long time.” He dodged the bullet again.

A.C. Arthur was born and raised in Baltimore, Maryland where she currently resides with her husband and three children. An active imagination and a love for reading encouraged her to begin writing in high school and she hasn't stopped since.

Working in the legal field she's seen lots of horrific things and longs for the safe haven reading a romance novel brings. Her debut novel Object of His Desire was written when a picture of an Italian villa sparked the idea of an African-American/Italian hero. Determined to bring a new edge to romance, she continues to develop intriguing plots, sensual love scenes, racy characters and fresh dialogue--thus keeping the readers on their toes!

In the young adult arena, A.C. also writes under the name Artist Arthur. Visit her Amazon Author Page for details about available YA books. amazon.com/author/artistarthurbooks