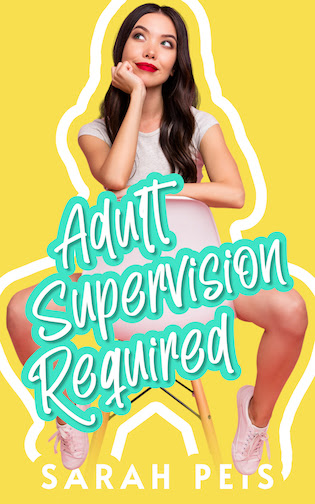 Adult Supervision Required
Author: Sarah Peis
Publication Date: May 6th, 2021
Genre: Adult Comedy / Contemporary Romance
Book Description:
Nora Lindberg doesn’t let life get her down. Disowned by her family and left by the man who was supposed to love her for the rest of their lives, she packs up her kids and goes in search of a second chance.
The small town she lands in was supposed to be her fresh start, her chance at a better life. But instead, she’s a broke single mom who spends her nights looking for the chocolate she hid from her kids.
When her ex lands on the local Motorcycle club’s most wanted list and leads them straight to her door, her life is once again turned upside down.
But maybe a broody hot guy on a motorcycle is just the thing she never asked for but got anyway.
Now the only question is: Will he be her savior or her downfall?
Buy Links:
Amazon US ¦ UK ¦ Barnes & Noble ¦ iBooks ¦ Kobo

“Don’t we all,” I muttered under my breath, then looked around the crowded supermarket, hoping nobody had heard her. “Not today, Sötnos. We still have some at home.”

I clamped my hand over her mouth and speed-walked my way to the checkout, hoping Luca wouldn’t join her out of sympathy. He was two years older, but hadn’t outgrown the tantrums yet.

She didn’t like having her shriek interrupted and her little face went red with anger. But I’d rather deal with my daughter’s wrath than once again be the talk of the town. We made it outside in record time, Lena wailing the whole way, Luca holding his hands over his ears.

I was running late, my shift starting in less than twenty minutes, and I still had to drop my kids home and drive to work. After wrestling them into their seats and dumping my bags in the trunk I hightailed it back to the house.

Lena made sure we knew her displeasure at not getting any popcorn for the duration of the drive. My friend Stella was sitting on the front steps waiting when we pulled up.

“Sorry we’re late,” I greeted her, unbuckling the little hellions. She watched my kids for me on the nights I had to work.

I couldn’t really afford a babysitter, so when she offered, I had to put my pride aside and let her help. She was my friend—one of the few I had—and I just couldn’t do it on my own anymore. I worked two jobs, barely keeping my head above water, and needed any break I could get.

My day job was a virtual assistant, something I could do from home while watching the kids. Luca had recently started preschool, so I only had Lena most of the time. My second job was waitressing at Pepper’s, a strip club. It paid well, but the hours sucked. I never thought I’d end up where I was.

“Don’t worry, I only just got here. Mason dropped me off,” Stella said, cuddling Lena to her and holding Luca’s hand. “But aren’t you going to be late for work?”

I checked the time on my phone and sprinted up the steps. Definitely going to be late if I wasn’t ready in the next three minutes. 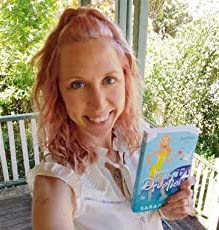 About the Author
Supporter of all things written, defender of the e-book revolution and master of the take out order - I'm not afraid to say I can't cook, go a week without breaking something, read labels correctly or park cars in a straight line.
I love the written word in all forms and shapes and if I'm not glued to a book I'm attempting to write one. I'm a frequent blonde moment sufferer and still trying to figure out how to adult. I live in Melbourne, Australia, with my two little humans, the holder of my heart and two furry demons. I love to hear from readers so feel free to get in touch.
Author Links:
Website ¦ Goodreads ¦ Facebook ¦ Instagram ¦ Pinterest ¦ Newsletter
***GIVEAWAY***
a Rafflecopter giveaway
Book Blitz Organised by: