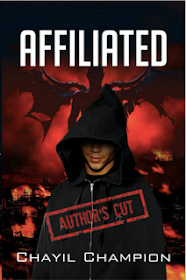 Book Description:
Ever Dance With The Devil? 14 year-old Tajalik Stokes is a member of the 17th Street Serpents, a murderous gang in Chicago. After losing his brother to gang violence, Tajalik becomes defiant and violent in his own right. Nonetheless, Tajalik begins to wrestle with his pride when he is confronted with the gospel of Jesus Christ by his peculiar guidance counselor, Alfred Justice who tries to mentor him. Yet, Tajalik’s egotism and disobedience land him in a “Dante’s Inferno” experience at the gates of hell. Now, in agonizing pain, misery and regret, Tajalik finds himself in a realm of darkness trying to figure out answers as to how he got there. In this Author’s Cut of Affilaited, Champion weaves together the same elements from the previous edition, while streamlining the storyline to fully immerse the reader into the domain of the streets where good and evil are oftentimes hard to discern.

Tajalik looked around in the dark void of where he stood, and saw the silhouette of more souls walking around him. Their faces were disfigured, too. He heard their weeping and moaning. Then, like them, he cried in misery and torment.

“William, what happens next? Is this it? We’re here forever, huh?”

“No, this is only the beginning, Stokes. Our affliction will get much worse.  For an eternity we-”

Loud screeching, screams suddenly interrupted William. Tajalik and the others, held their hands over their ears to block out the sounds that became intolerable. The noise only added to the burden of the souls. All of the afflicted began to run. Tajalik saw William turn and sprint, followed by the countless others that ran from the sounds. Tajalik tried his best to stay close to William. The screams seemed to get closer as Tajalik caught up to William. The two sprinted with thousands of others running away from the abominable noise following behind them. The screams of souls, echoed throughout the darkness, running from the predators who were seeking to destroy them.

The two veered down another dark path. On both sides of them were barren trees. It was so dark; the two were vaguely able to see in front of them. They continued to run as they heard the screams of other souls being picked off and tortured, by whatever creatures captured them. Tajalik looked through the forest. Alongside the path, he thought he saw a hill. He was only able to make it out because of its height in the background; which towered over the trees. Suddenly he felt inclined to veer off the path. Everyone running behind him seemed to be getting intercepted by their attackers. It made sense to take the road less traveled. He turned and ran through the forest of barren trees; leaving William to his own fate. He continued to hear the cries of the other souls. It was unbearable. Tajalik worked his way towards the hill; through the trees and thickets. As he ran, he heard himself getting farther and farther away from the screams. He stumbled and even ran head first into some branches that were unseen in the darkness. It still did not stop him. Finally, he came to the forest’s end.

He was standing in a small field, just a few yards from the base of the hill. He heard more branches rustling. He continued to run again, fearing he was being chased by the creatures that terrorized the dark. A figure emerged, running through the trees. Tajalik continued to sprint towards the hill, as he got closer he spotted a crevice at the base. It looked like a cave. With nowhere else to run, he headed straight inside. He stopped in dead in his tracks at the sight of a group of boys staring at him through black hoods. Tajalik became faint with fear. These were the boys that he saw in his dream; following him down the long dark road. Their unsettling stare terrified Tajalik even more. The figure that had been running behind Tajalik now stood at the opening at the bottom of the hill.

“Who are you?” asked the figure.

“What were those things?” Tajalik asked as he backed himself against a side of the cave wall, where he could keep an eye on the figure and the group of boys.

“It’s part of our sentence. Just don’t get caught. If you do, it makes your after-life that much worse.”

“What the hell are you talking about, man?”

“…But the children of the kingdom will be cast out into outer darkness: there will be weeping and gnashing of teeth. Matthew chapter eight, verse twelve. I bet you wish you believed now.  Don’t you?”

Tajalik looked at the figure as the figure slowly approached him. Tajalik was baffled. It was another young boy in a hood. He nodded towards the other boys.

“We’re all lost souls, man. I’m Lavelle. I grew up in church. Had a mother and a grandmother who prayed for me consistently. They made me go to church regularly, even had me memorize scriptures from the Word. I had mentors who were constantly around me, telling me what to do and what not to do. I didn't listen. I bucked authority because I loved the street life. I made the choice to not listen to the information, not to listen to the truth that was given to me. That’s the one thing that separates us that dwell here and those that dwell in paradise. That’s the key; Jesus Christ and the choices we make in life. I chose to rebuke the information. So here I stand.”

“So what do we do?” asked Tajalik in intense trepidation.

“We run and hide, Tajalik. It’s only a matter of time before they come through those woods to seek us out. They know this side of the gulf inside and out.” 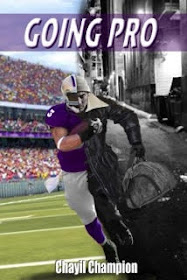 Book Description:
Enoch Zoles is an agnostic, egotistical, collegiate football star, primed to make millions of dollars as a professional football player. But a one-night stand with a seductive vixen leads to a downward spiral of devastating events, which cost him his reputation, his promising future, and his freedom. And, after experiencing an unexpected tragedy, Enoch wants nothing to do with the God his coach and mentors keep talking about. After repetitive visits to jail, he meets a mysterious inmate who challenges his humility, integrity, and faith—right down to the core of his spirit. But will it be enough to save him from a dreadful end?

About the Author
Chayil Champion is a graduate of the University of Miami in Coral Gables, Florida where he double-majored in both English and Journalism while competing as a two-sport athlete in both football and track. After graduating from UM in 1998, Champion received his masters and doctorate degrees in education from Nova Southeastern University in Fort Lauderdale, Florida. He embarked on a career in education as an English teacher and vice principal in South Florida’s Dade County and West Palm Beach County public school systems respectively before moving to Los Angeles, California in 2009.

A native from Evanston, Illinois, a suburb that borders Chicago’s north side, Champion developed a love for writing at a young age which carried well into his adult years. After penning his first book in 2009 upon his arrival to Los Angeles, Champion has gone on to write five more books, which include the Young Adult fiction novels, Affiliated and Going Pro, both from The Lost Souls literary series. Champion also wrote Exiting The Wilderness and But He Said He Was A Christian, two nonfiction Christian self-help books. His latest book, Majesties of Canaan: The Goliath Project is a Young Adult, super hero novel. It is the first book of many within the Majesties of Canaan Superhero Series and the second book of The Dark Spores Series where Champion has partnered with best-selling authors Keshawn Dodds and Braxton Cosby to form the new superhero universe and to collaboratively pen the upcoming superhero novel Infinity 7 due in early 2017.

Outside of his love for writing, Champion, runs his own education consulting company in Los Angeles where he continues to teach and tutor students. In his free time, Champion focuses on fitness as he is a gym rat, frequents movies, and enjoys spending time with his daughter Vanessa.