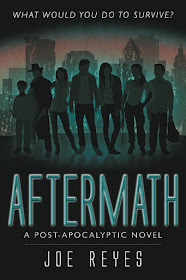 Book Description:
Aftermath is a growing series about war, love, brutality and most of all, survival. What was once the United States has become a savage post-apocalyptic environment where the worst of the worst prosper and the remaining good hide.

The series features a brutal setting, where seven characters in different parts of the United States must adapt to this new environment. The "fight or flight" mentality plays into the story, as the nation is divided into factions fighting for control of the country. The government is outnumbered, outgunned, and forced into hiding as well to recoup their forces. The novel follows a fast paced momentum from the first page to the last word. The plot pits these characters against the elements and each other, with plot-lines intertwining on opposite sides of the war effort. And one character's quest for revenge can jeopardize not only the war outcome, but the reshaping of the entire nation.

With an ever-changing storyline and evolving characters, the Aftermath series gets more intense with every chapter. But what these characters don't realize, the terrifying evil is making its way across the ocean.

Hi my name is Joe Reyes and I’m the author of Aftemath, today I wanted to share some noted about the character Ron in my story. I hope you enjoy.
Ron was the second character that I wrote about. He was originally a quick, one-page short story about someone in a post-apocalyptic story. The story was called Even Heroes Get Hungry, and it was about a man fighting for food in the wilderness. The story was to show how good people will do bad things for food.
I was writing the Ian story, and decided to put Ron in the mix, because I really liked the character. I wanted Ron to be young. Originally, I was shooting for ten years old. I wanted his parents to be dead so it forced Ron to be on his own.
Ron was an interesting journey because he didn’t know much. Everything he learned was in the woods. He stayed away from people, because he didn’t trust them. How could he? He’s been on his own since the bombs fell. Since then, everyone has been out for themselves.
When Ron gets in contact with a group of rebels, it’s hard for him at first. He has never been part of a “group” before. Initially, he thinks about how he would escape from them, but, as things progress, he loses those feelings.
Ron on started off as a little boy with a knife and progressed to a little boy with a machine gun. Through Ron, you get to see into the army of Cortez. He is the only character in Aftermath who comes up close and personal with the leader himself.

A bullet tears into the tree. Trapped behind it with nowhere to run, Ron clutches the tree until the marks of the bark become imprinted in his flesh. He is not scared; he is waiting. He sticks his leg out, only to retract it when his assailant sends another barrage of bullets his way.
Ron feels his warm breath blowing through his face mask. It comes more heavily now with his exhaustion. His ski cap is tight to his face and, thankfully, warm. It is decorated with the logo of an extinct sports team but he hasn’t the faintest idea which, let alone the sport. He’s spent days trying to outrun the winter weather, but, inevitably, it caught up.
A few dozen yards away is the house. Probably packed with food, Ron thinks as he feels his stomach growl. He hasn’t had a meal in a day.
His body is already feeling the effects of the fatigue, but he doesn’t dwell. He’s been in this position many times before. Take a quick peek.
Ron pops his head out quickly to find that the shots are coming from the second floor of the house. He figures it’s a high-caliber rifle, bolt action, based on how long it takes between shots.
He looks around as best he can without attracting another bullet shot at his head. Trees are scattered around him, providing cover, but he only has a revolver. Worse yet, there is only one shot left in it and he isn’t a good shot. At best, it could provide a semi-decent distraction while he ran into the house.
Luckily, the man with the gun must be low on bullets as well. He won’t want to keep hurling them carelessly in Ron’s direction. Morning has only just broken, so he can’t wait until nightfall to make a move. And he’ll freeze soon if he stays this still.
Ron takes his jacket off, begrudgingly, and drapes it over one arm, carrying the revolver in his opposite hand. He tosses the jacket one way and runs the other way, hiding behind another tree. The man takes another shot, but misses. He breathes a sigh of relief. He knows he’s only about three feet closer, but the man has one less bullet to shoot.
There is a low clicking sound. Ron doesn’t know what it is, but his eyes widen.
Go now!
He turns, running full speed into the house and driving his shoulder right into the door frame. It bursts open. Without looking around, Ron sprints up the steps, which creak as he ascends.
The gunman stands at the top, trying to figure out the rifle. Ron raises his gun and shoots the man right in the chest. His victim falls back hard, slamming into the wall and sending every picture frame attached to it falling to the ground in a chorus of shatters.

About the Author
Joe Reyes has never been afraid to go for what he wants in life. His goal is to be a full time published author and is taking all the steps necessary to make that dream a reality. He hates when he hears about people who give up on their dreams.

His writing style is fast paced. When he wrote his novel Aftermath, he wanted it to feel like a television show. Joe doesn’t like boring descriptions. He finds filler scenes to be a book killer and makes sure that every chapter has an immediate purpose or a purpose later on.