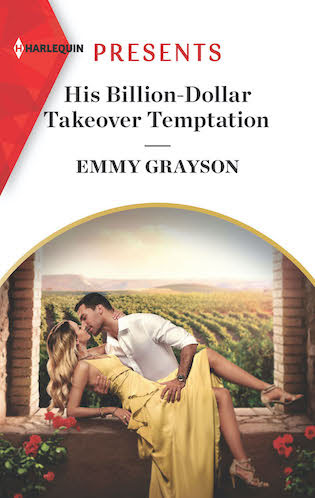 His Billion-Dollar Takeover Temptation
(The Infamous Cabrera Brothers, #1)
Author: Emmy Grayson
Published by: Harlequin Presents
Publication Date: May 25th, 2021
Genre: Adult Contemporary Romance
Book Description:
In debut author Emmy Grayson’s sexy workplace romance, will the Spanish CEO be able to resist giving in to desire?
He will claim her company
But can he claim her, too?
Everleigh Bradford won’t simply hand over control of the family vineyard she expected to inherit. She’s lost too much already. If she must confront internationally renowned new owner Adrian Cabrera, she will! Even if she has to fight her red-hot response to the brooding Spaniard.
Bringing Everleigh home to Grenada to prove he’ll protect her heritage is essential to their working relationship—but it’s dangerous. Innocent Everleigh is intoxicating. And she deserves everything that Adrian’s past and his iron self-control won’t let him give her. No matter how tempting it is…
From Harlequin Presents: Escape to exotic locations where passion knows no bounds.
Buy Links:
Amazon US ¦ UK ¦ Barnes & Noble ¦ iBooks ¦ Kobo ¦ Google Play

She had just congratulated Cora and Cole Owens on their daughter’s recent marriage when she passed by the dessert buffet. The table, draped in burgundy silk and lit with gold votives, offered up treats like gourmet chocolates infused with caramel and raspberry, chocolate soufflé bites and an elevated crystal tray stacked high with cookies dusted with powdered sugar. Polvorones, according to a black sign with gold cursive. Beneath it, in small print, she read:

“My abuela would bake up a batch of polvorones in her tiny kitchen every weekend. We include a dish of ‘dust cookies’ at every Cabrera Wine event to honor her memory.”

The signature at the bottom, written in a bold script, read “Adrian Cabrera.”

Surprise filtered through the adrenaline that still pulsed through her. She hadn’t thought of the man as sentimental. Curious, she picked up a cookie and bit into it.

Bursts of cinnamon and chocolate filled her mouth as the delicate treat melted on her tongue. Her senses quivered at the rich taste. Not that she had any experience with sex, but if she did, she’d bet these cookies would give lovemaking a run for its money.

Her eyes flew open. Adrian Cabrera stood in front of her, shoulders thrown back and hands casually resting in his pockets.

Everleigh swallowed quickly, her mouth drying out under the intense scrutiny of his hooded gaze.

“Um, yes.” She smiled slightly. “Possibly the best cookie I’ve ever tasted.” She gestured towards the sign. “And I think this is great. To honor your grandmother like this.”

Something dark flickered in his eyes but disappeared too quickly for her to discern what it was.

“You were looking for me.”

Mind your manners, Everleigh. Dad’s voice echoed in her mind. She mentally forced herself to relax and not point out that it was polite to thank someone when they gave you a compliment.

Arrogant jerk. She bit down on her tongue. Her first inclination was to cut this sexy but maddening man down to size, but she wouldn’t let her temper get the better of her again. This second chance to speak to him was a blessing, and not one to be taken lightly.

“I wanted to apologize for my harsh words,” she forced out.

He tilted his head, his eyes narrowing. “Really?”

She clenched her hands together and looked down. “I’m not normally so rude. Dad’s health has…” A lump rose in her throat and she swallowed hard. Now was not the time for tears, and Adrian Cabrera did not seem like the type of man who would tolerate weakness. “I reacted hastily and made some horrible accusations.”

Silence stretched between them. She looked back up and maintained eye contact. She would force out an apology, but she wouldn’t give him the satisfaction of letting him intimidate her.

For what seemed like forever but was probably only ten seconds or so, they stared at each other. The energy between them changed, nearly causing her to totter back on her heels at the strength of the attraction that crackled between them like lightning. Carnal thoughts rose in her mind, accompanied by vivid images of his bronze skin pressed against her body as they rolled across a bed, tangled in the sheets.

Her cheeks grew hot. One hand flew up to her face before she could stop it, as if she could hide her response.

Judging by the slow smile spreading across his face, he knew exactly what was going through her mind.

The band finished their song to a round of hearty applause. A beat later, they struck up another tune. The sultry notes of a slow song floated on the air as the ballroom lights dimmed. About the Author
Emmy's interest in romance can be traced back to her love of Nancy Drew books, when she tried to solve the mysteries of her favorite detective while rereading the romantic chapters with Ned Nickerson. Fast-forward a few years when she discovered a worn copy of "A Rose in Winter" by Kathleen Woodiwiss on her mother's bookshelf, and she was hooked. Over 20 years later, Harlequin Presents made her dream come true by offering her a contract for her first book.

When Emmy isn't writing or reading, she's chasing around her baby boy, feeding her menagerie of fur babies or carving out a little time on her front porch with her firefighter hubby.